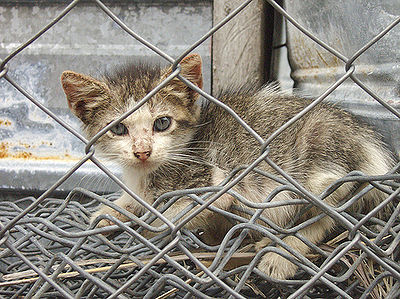 A five year study of a vaccine funded by the Morris Animal Foundation was performed at the University of Florida. The vaccine, GonaCon looks promising to help control feral cat populations.

GonaCon seems to be an effective, long-acting contraceptive that is non-lethal and non-invasive. It was developed at the USDA Animal and Plant Health Inspection Service National Wildlife Research Center. The vaccine is registered by the U.S. Environmental Protection Agency and has been used effectively on female mammals including white-tailed deer, feral horses, bison, elk, prairie dogs and ground squirrels.

The vaccine stimulates antibodies to produce and bind to GnRH, a hormone that controls the production of sex hormones (estrogen, progesterone, testosterone). The antibodies reduce the ability of the animal to produce the sex hormones preventing the animal from being sexually active. The animal will not reproduce as long as enough antibodies are present.

Researchers administered the vaccine to 15 female cats and placebos to 5 control female cats. A breeding male was then placed with them. The cats given placebos were pregnant within 7-28 days. The cats receiving GonaCon were 93% infertile for the first year with decreasing infertility over the 5 year period as expected.

This could be a safer adjunct to the trap, neuter, release program.

When one woman, Jesse Huart, was denied travel on United Airlines with her 10 year old Pit Bull, she began a campaign to end breed restrictions. Ms. Huart’s petition was endorsed by Best Friends Animal Society, veterinarians, military families and dog lovers worldwide with 45,000 signatures. The airlines will no longer ban the following breeds […]