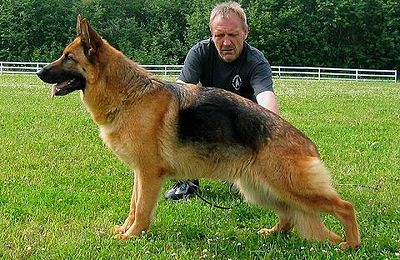 Actually, there is no record of the first police dog. But the Encyclopedia Britannica Online tells us that “Dogs were first trained in police work at the turn of the 20th century in Ghent, Belgium and the practice was soon adopted elsewhere.” Dogs have been man’s companion for thousands of years, serving in many ways, always faithful and loving. Their keen noses and sense of hearing have aided humans in so many ways including during wartime and police work.

The first K-9 unit was created by the U.S. Army during the Seminole Indian War, 1835-1842. The first police canine corps was developed by European law enforcement in the early 1900s.

German Shepherd Dogs became the popular breed to use for combative purposes due to their use by the Nazis in concentration camps during World War II. The K-9 Global Training Academy in Texas explains that German Shepherds, with their extremely strong scissors bite can tear out hunks of human flesh. Wounds usually become infected and the scars are permanent. They are highly intelligent and easily trained.

Today, police dogs wear bulletproof vests and badges naming them law officers. If a police dog is killed in the line of duty, he is given a funeral ceremony with full police honors.

How Were Breeds Named

Have you ever wondered how breed names came about? Some are obvious such as those named for their places of origin. Others are named for the person who developed them, the breed’s job and still others were inspired names. Here are some examples. Cairn Terrier – Called cairns in Scotland (home to this terrier), they […]

The crate is a general term for carriers, kennels or crates. Crates come in different materials and sizes. They can be made of plastic, fiberglass or wire. Some smaller carriers are also made of cloth. The Cat Playpen and 2 and 3 tiered crates are large, tall and airy. There are 2 or 3 platforms […]