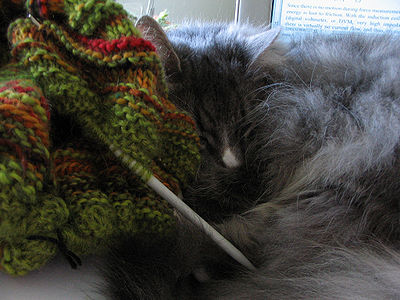 This is another one I learned from personal experience as I love to knit and often left my yarn projects lying about.

Cats love playing with yarn and are often pictured that way. It’s too bad that cats are not shown playing with safer toys to give us the correct impression. But that ball of yarn, while it may be considered a fun toy, can turn into a lethal weapon directed against your cat.

A cat’s tongue acts to push things back and down it’s throat. That means when the cat begins to swallow the yarn (or any object), the cat has no way to stop it.

The yarn can then become twisted around his insides causing very serious problems and an immediate trip to your veterinarian or emergency clinic. If you can, have a friend drive while you call ahead and explain the situation.

My own experience was not with a ball of yarn but rather a sweater. At the time, our Siamese cat, Coco, liked to chew on inappropriate items such as a sweater I had knit for my daughter. I didn’t realize he had ingested some of the sweater, just saw a couple of gaping holes in it. The yarn eventually surfaced coming out in his poop as one long string. After a trip to the vet where Coco was declared yarn-free, I never left any yarn or sweaters where he could reach them.

The holes in the sweater were repaired with knitted patches and remains as a reminder of the danger of yarn for cats.

Book Review: Do Cats Always Land on Their Feet?

Do Cats Always Land on Their Feet? by Marty Becker, DVM and Gina Spadafori This is a quick read that responds to your curiosity about your cat’s sometimes odd behavior. It’s filled with humor and practical knowledge. If you want to better understand your cat’s ways, this book explains it all. Dr. Marty Becker is […]

Train Your Cat to Sleep at Night

Most cats in the wild, big and small, hunt at night. This behavior has been passed down to our pet cats, sometimes much to our regret. Often a cat will decide that midnight is the perfect time to play and start the day. And who better to choose as a partner, but you as you […]