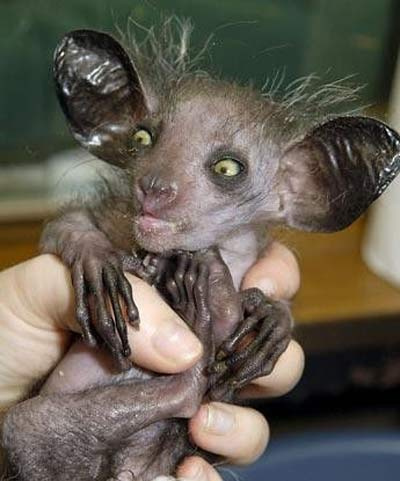 Besides having a strange name, the Aye Aye is one of the weirdest looking creatures in the world. Perhaps movie gremlins were modeled after them.

The Aye Aye is a member of the Lemur family. It is a nocturnal primate, native to Madagascar. Its long, thin middle finger is used to tap on trees to locate grubs. Using its rodent-like teeth with incisors that continually grow, it chews a hole in the tree and uses its middle finger to pull out the grubs. The Aye Aye’s ears are similar to a bat’s and it has very large eyes.

They appear to show no fear of humans and will walk down villages in Madagascar. This is probably a mistake as in some parts of Madagascar, the Aye Aye is considered bad luck and will be killed if found.

The Aye Aye is considered near threatened because of superstition and it’s habitat being destroyed. Chances are, because of their limited number, the Aye Aye is not legal to own as a pet.

In the wild, Sugar Gliders have been known to jump 100 feet and more. So we do know they can leap long distances. These marsupials are not actually flying although it may appear that they are. They are named for their ability to glide long distances. And they have a sweet tooth as well. The […]