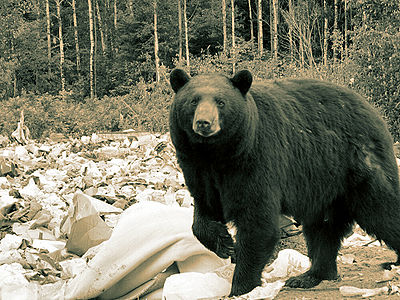 There are a total of eight bear species and all of their populations are dwindling.

The Giant Panda is in extreme danger of extinction due to its localized habitat and highly specialized habits. There are currently fewer than 1,000 wild giant pandas in 25 subpopulations distributed along the eastern edge of the Tibetan plateau. Luckily, serious conservation efforts to save the panda have been implemented.

The Spectacled Bear inhabits the South American range. Its habitat is disappearing due to increased farming. As the bear’s food sources have dwindled, it has begun to depend on crops. Unfortunately, this means that farmers see the bear as a competitor for survival. Bears are also hunted in South America for use of their bone bruises, claws and penis bones in folk medicine. These body parts are believed to enhance strength and fertility. Legislation against bear hunting exists but is rarely enforced. Education of the local population could go a long way toward saving the Spectacled Bear.

The Sun Bear of Southeast Asia suffers from loss of habitat due to conversion of forests to agricultural land and poaching. Ironically, most of the poaching is happening on nature reserves. Extensive research on Sun Bears has not been undertaken, leading to a lack of interest in their conservation.

There are probably 8,000 to 22,000 Sloth Bears in the world, most living in central India’s forests. Forest cutting is altering their habitat and poaching is a serious problem. Sloth Bear gall bladders are sold on the international market. Cubs are captured for use as dancing bears or for fighting. Their mothers are generally killed in the process. Legislation has not been enforced and is ineffective.

The Asiatic Black Bear is endangered due to poaching, habitat loss, being killed for sport and capture for the pet trade. Performing bears (who are trained to dance and wrestle) are common in Pakistan. In Korea, Japan, Thailand and China bears are killed for food. People in these countries eat dishes such as bear-paw soup. Korean tourists visit Thailand especially in order to taste bear meat. The Chinese use bear bile to make brown crystals for folk medicine. About 10,000 Asiatic Black Bears are kept ins small cages on farms where their bile is drained from their stomachs on a regular basis. The bile is then dried and made into crystals.

The Brown Bear originally had a wide range, occurring in Europe, Asia, and North America from northern Arctic tundra to dry deserts. The invention of guns and poison to kill bears reduced their number significantly and Brown Bears are practically extinct in Europe now. In North America, their population has been greatly reduced as well. In America, the species is divided into two subspecies: the grizzly bear and the Kodiak bear. The Kodiak Bear lives in Alaska and western Canada and is considered a game animal.

International cooperation has been successful in improving the prospects of the polar bear. However, its biggest problem is habitat alteration brought about by global warming. There are an estimated 22,000 to 27,000 polar bears worldwide.

Successful conservation for bears should consist of two types of efforts:

The survival of bears in the wild is dependent on succeeding at these efforts. If conservation is not seriously undertaken, the next decades could see the extinction of bears from their natural habitats.

Vital Statistics: Place of Origin: Denmark/Sweden Group: Herding/Companion Height: 12-14 in. Weight: 15-25 lbs. Life span: 10-15 yrs. Trainability: medium Good with children: yes Good with other pets: yes with other dogs, may see small pets as prey The Danish-Swedish Farmdog originated in the Scandinavian countries of Denmark and Sweden. The breed was officially recognized […]

Since the release of the movie “The Horse Whisperer” in 1998 and its re-release in 2007, there has been much interest generated in communicating with animals. There are people who claim to be whisperers for all types of animals, from pets to those in the wild. Cesar Milan, who calls himself “the Dog Whisperer” uses […]