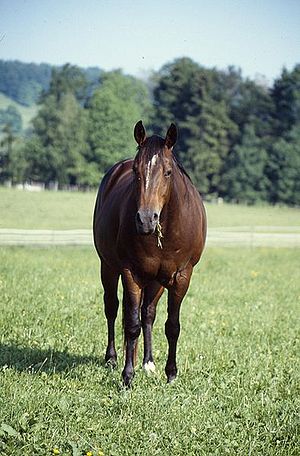 Ranching is the practice of raising grazing livestock such as cattle or sheep for meat or wool. Less commonly, ranchers sometimes raise elk, American bison ostrich and emu. Ranchers are mostly found in the Western United States and Canada.

The primary mode of transportation on ranches is the horse. Cowboys and other ranch workers often need to travel on terrain that cars and trucks can’t access.

A good stock horse is on the small side, generally under 15.2 hands (62 inches) tall at the withers and often under 1000 pounds, with a short back, sturdy legs and strong muscling, particularly in the hindquarters. He must also be intelligent and calm. Horses on ranches are trained to perform a number of tasks. When a cowboy works the cattle, he can only keep one hand on the horse’s reins, so the horse needs to have good cow sense; he must know how to react to the cattle without prodding from his rider.

The breed most commonly used on ranches is the American Quarter Horse.

Rodeos have developed from traditional tasks performed on a ranch, although most of the competitors today are not cowboys. Instead, they are professional athletes who make a living from the competitions.

In Brazil, cattle ranches are replacing forests and nearly 80% of the Amazon rainforest has been turned into cattle pastures. Brazilian cattle ranching is also responsible for large numbers of people held as slave laborers. Organizations such as Greenpeace are working to convince the Brazilian government to stop the deforestation of the Amazon.

Neighbors who object to a dog’s barking can make life pretty unpleasant for both you and your pet, and understandably so – much as any person loves dogs, listening to a barking dog at all hours of the day can be extremely annoying. When your dog barks it can be for many reasons, to warn […]

The FDA reports the following recall of Western Feed for Horses: Western Feed, LLC is voluntarily recalling two lots (M718430 and M720280) of Kountry Buffet 14% feed because it may contain monensin sodium (Rumensin). The feed is packaged in 50 lb. bags bearing the Payback logo with the attached tag identifying the product as Kountry […]