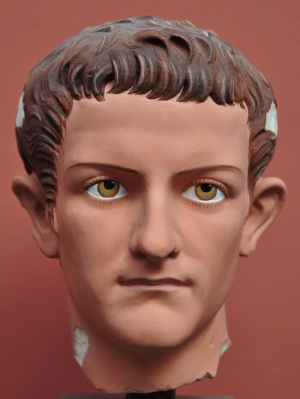 Incitatus was Roman Emperor Caligula’s favorite horse. The name is Latin for impetuous.

Because Caligula took cruelty to extremes and his behavior was so bizarre, it is thought he may have been suffering from a mental disease.

But the one thing Caligula did love was his horse Incitatus. Stories about his treatment of Incitatus abound.

Incitatus was brought from Spain adding to Caligula’s racing stables. He was said to have run many races winning most if not all of them.

Caligula loved the horse so much that he built a stable of marble with an ivory stall and a gold water bucket. His collar was covered with precious stones. Incitatus was said to have many servants to attend to his needs. According to Suetonius in the Lives of the 12 Caesars, Incitatus ate oats mixed with gold flakes. He would “invite” dignitaries to dine with him.

Incitatus was covered in the finest cloths with red borders which historians believe proved that Caligula gave the horse the position of Senator.

Some historians believe that Caligula’s treatment of Incitatus was his way to ridicule and anger the Senate in a perverted sense of humor that had no basis in insanity.

Although unknown whether true or not, it has been said that Incitatus eventually turned on Caligula, wounding him badly. With swift justice, Caligula then had his beloved Incitatus beheaded.