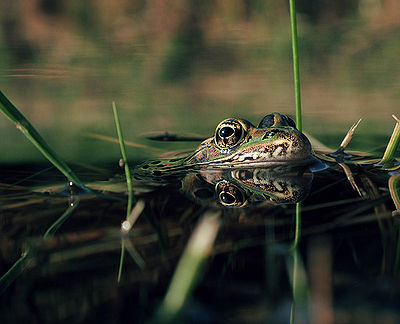 Amphibians are facing extinction around the world. The main cause is a deadly parasitic fungus known as amphibian chytrid, but amphibians are also suffering from habitat loss, climate change, pollution, pesticides and introduced species.

The Panamanian golden frog is in danger because of chytrid fungus. This disease affects the amphibian’s skin, through which it breathes and drinks water. There is no way to treat the disease in the wild or stop its spread.

The Wyoming toad is extinct in the wild and only survives in captivity. In the 1970s, spraying of insecticides to control mosquitoes, changes in agricultural practices, and an increase in predators and climatic changes caused the population to crash.

The Kihansi spray toad is native to Kihansi Falls in Tanzania. A recent diversion of water for a hydroelectric plant has endangered these animals. An attempt has been made to provide alternative hydration for these toads, but this effort has not succeeded. They may soon be in existence only in captivity.

Agricultural development, illegal crops, logging, human settlement and pollution are endangering the Lehmann’s poison frog. Its habitat is in the rainforests of Colombia and it is a beautiful brightly colored frog.

The Interior robber frog from Puerto Rico suffers from chytrid fungus and introduced predators. Its population has decreased by 80%.

The Mountain chicken frog (also known as the giant ditch frog) has two habitats. In Montserrat, its population decrease is due to volcanic eruptions in the 90s, along with the introduction of feral pigs and rats. In Dominica, chytrid fungus is responsible for the decline.

Cowan’s mantella, or the harlequin mantella, is a beautiful black and orange frog which has been brought to the brink of extinction by the pet trade. The government of Madagascar, where this frog is from, has taken steps to put a halt to the exploitation of this species.

The Corroboree frog is a striking black and yellow frog, native to Australia and in danger of extinction. Fewer than 250 adult frogs are thought to be living in the wild.

The Table mountain ghost frog is endangered by the national park which makes up its habitat. The frogs live in the streams and forests of a national park in Cape Town, but visitors, new plants, holding streams and fires have hurt the species.

The world’s largest amphibian, the Chinese giant salamander, is considered a delicacy in Asia and is illegally hunted. Hunting is the main reason for its endangered status, although loss of habitat and the building of dams in China also play a part.

The Bearded Dragon requires a body temperature of 93 – 110 degrees Fahrenheit to maintain good health. When it reaches this temperature, the dragon often opens its mouth. This activity is called basking and allows the Bearded Dragon to dissipate extra heat and enjoy basking. While open mouth breathing can be a sign of respiratory […]