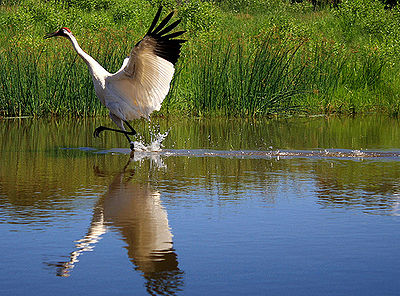 There are 403 endangered bird species in the world today.

There are approximately 320 Whooping Cranes left in the world. In the late 1930s there were about 16 birds left and the American government began efforts to save this species. Their breeding ground is in the Wood Buffalo National Park in the North West Territories of Canada, and in the fall they migrate to Texas for the winter.

The Ivory-billed Woodpecker is listed as endangered although it might very well be extinct. No real evidence of a sighting of this bird has surfaced in 30 years.

The Puerto Rican Parrot is down to about 26 parrots in the wild and 56 being kept in captivity at the Luquillo Aviary, a bird refuge in Puerto Rico. When the Spanish first arrived in Puerto Rico in 1493, there were about 100,000 parrots there.

The Mexican Spotted Owl’s habitat is being destroyed by both logging and forest fires. The owl is now being protected on government forest land in New Mexico and Arizona. There are about 2,000 Mexican Spotted Owls in the world today.

Destruction of wetlands in North America and pollution have caused the Wood Stork to become endangered. Its natural habitat is in swamps, marshes and ponds in the southern U.S. down to South America. In the past 60 years the Wood Stork population has dropped from 60,000 birds to 9,000 birds.

What you can do to help

When bad weather approaches, birds, just like we humans, instinctively seek shelter from cold and storms. Birds that nest in cavities in trees can hide out in their tree holes. Small birds can find protection in thick hedges or the downwind side of a tree. They tend to find places closest to the ground where […]

Teach Your Bird to Talk