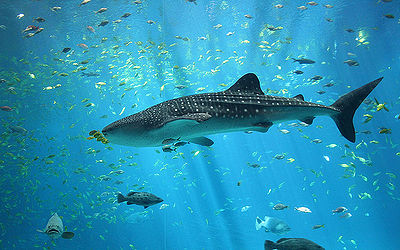 It is hard to keep track of the numbers of fish in the rivers, lakes and oceans because they move around so much. It also hard to protect them for this reason. Fish which return to the same stream every year to spawn are easier to keep track of. The main reason fish become endangered is over-fishing, followed by habitat loss and pollution. Fishing fleets are around two to three times bigger than the waters can support. Modern fishing methods cause destruction of species which aren’t the fishers’ target.

The 40-ft (12 m) Whale Shark is a naturally rare species and has become even more sparse in the last decade as a result of over-fishing.

Chinook Salmon were once a common site in the Pacific Northwest and played a significant role in Native American culture. Scientists fear that this fish may become extinct by the year 2016.

The Andean Catfish from Ecuador is endangered due to pollution, fishing and habitat loss.

In England, cod is becoming endangered since it has traditionally been the country’s favorite fish. North Atlantic cod is seriously over-fished in the areas of Greenland and Newfoundland.

Blue Fin Tuna, an integral part of sushi, is also endangered. A single adult fish can sell for upwards of $160,000. The Japanese consume about 45% of the world’s Blue Fin Tuna. Greenpeace Japan has launched a campaign to remove this fish and other endangered species from the supermarket shelves. You can read about this campaign in The Independent.

What you can do to help

If you eat fish, you can avoid eating the species which are endangered. See the Consumer Guide to Overfishing to find out which fish to avoid. Get the word out about these endangered fish to your friends and family. Be careful not to litter, as trash can find its way into water sources and harm fish. You can also volunteer for a conservation organization.

The Great Barrier Reef is the world’s largest coral reef. The reef contains an abundance of marine life and comprises of over 3000 individual reef systems and coral cays. It is located in the Coral Sea, off the coast of Queensland in north-east Australia. In 1981, it was selected as a World Heritage Site. It […]

Water covers over three-quarters of the earth’s surface and fish are the most numerous of the vertebrates. There are about 31,500 species of fish and they are classified by physical characteristics, habitat, behavior etc. List of fish families: Damselfish Dottyback Tang Wrasse Facebook Comments Box