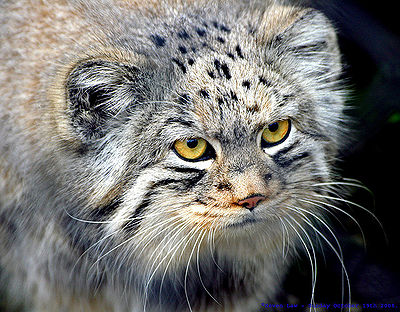 Three quarters of the world’s wild cat species are small. Many of them are endangered due to factors such as loss of habitat and capture of cats for the pet industry.

Black footed cats are possibly the smallest species of cat on earth and are native to Botswana, Namibia and South Africa. Overgrazing of livestock in the area as well as indiscriminate poisoning of caracals and jackals are dangerous to these cats. Dogs used to hunt jackals also prey on black footed cats. The cats are are fully protected in South Africa and Botswana, but receive no legal protection in Namibia.

The sand cat lives in deserts around the world. It is hard to track due to the fact that the fur on the soles of their feet that prevents them from sinking in soft sand also makes their tracks almost invisible. The exact number of sand cats in the wild is unknown, but they are captured in the wild for the pet trade and also shot for sport. The Pakistan sand cat is listed as endangered and may be extinct in the wild.

Wildcats are similar in their behavior to domestic cats. The main threat to the species is the dilution of the gene pool through interbreeding with feral domestic cats. They are also persecuted by farmers who seek to protect their poultry and are often victims of automobile accidents. In the past they were hunted for their fur but that has almost entirely stopped. European wildcats are better protected by law than the African and Asian varieties.

Very little is known about the Bornean bay cat. It is possible that this species has always been rare and loss of habitat has caused it to diminish even further.

The Chinese desert cat (also known as Chinese mountain cats or Chinese gray cats) is another species about which little is known. It is fully protected in China, although there is no information on its population.

Flat headed cats of south east Asia are the most unusual members of the cat family, with their long, narrow head and flattened forehead. Almost nothing is known about these cats. They were declared extinct in 1985, but a small number have been seen since. Water pollution is the main danger to these animals. Although they are fully protected in most of their range, they can legally be hunted in Singapore and are not protected in Brunei. These cats are so obscure that it is possible they will become extinct before we have a chance to save them.

The Iriomote cat is confined to a small island called Iriomote Shima, east of Taiwan. The natives of the island sometimes capture these cats and eat them. These cats are also threatened by competition and interbreeding with feral cats and human development of the island. Part of their habitat has now been declared a wildlife protection area, and Japan’s Environment Agency has set up a feeding and monitoring program, with a view to increasing their numbers.

Jungle cats don’t actually live in the jungle, but rather in moist areas near bodies of water. They are found in Egypt, Indochina, Thailand, Sri Lanka and Vietnam. Although occasionally killed by farmers and sportsmen, the main danger to these cats is loss of habitat.

Leopard cats are the most common wild cats in Southern Asia. Domestic cat breeders have recently begun to breed leopard cats with domestic cats, creating a cat called “bengal cat.” This practice endangers the leopard cats. Leopard cats are prized for their fur in Asia, further diminishing their numbers.

Marbled cats are native to Asia. Since they live in forests they are particularly vulnerable to the widespread destruction of tropical forests in Asia. They are extremely difficult to breed in captivity and only one zoo has had partial success.

Pallas’ cats are also called steppe cats and rock wildcats. They are well adapted to their habitat of rolling steppe, alpine desert and rocky country in central Asia. They are hunted for their luxurious fur. Although hunting is prohibited in most of their range, it is unregulated.

Rusty spotted cats are one of the smallest wild cat species. The main threat to these small cats is the destruction of their natural habitat due to the needs of the ever growing populations of India and Sri Lanka.

Andean Mountain Cats are so elusive that they are almost never seen, even by scientists. Almost nothing is known about these cats and none have ever been kept in captivity. In fact, it is not clear whether these cats are rare or whether this is a misconception due to the fact that they are so difficult to sight. If they are indeed rare, this may be a natural phenomenon.

Another little-known South American cat is the Geoffroy’s cat. Although illegal, these cats are still hunted for their pelts. Domestic cat breeders interbreed them with domestic cats to create an exotic breed called a “safari cat.”

Jaguarundi are strange looking cats which were apparently once kept as pets in Central America. They are not hunted but habitat destruction is threatening them.

Kodkods are the smallest wild felid in the western hemisphere. They are found in small numbers on Chiloe Island, off the southern tip of Chile. Since they are restricted in a small habitat, human development endangers them. Education of the natives of the island has caused them to join the conservation efforts, but they are still occasionally caught in traps set out to kill foxes, or killed because they are a threat to poultry.

Margays are beautiful cats whose population has almost been totally decimated by over-hunting for fur, capture for the pet trade and massive deforestation. Despite its protected status, the margay is the most common pelt in the southern Mexico skin trade.

Oncillas are one of the smallest cat species in the Americas. They are endangered as a result of being hunted for their fur. Since they don’t breed well in captivity, efforts are being made to help them breed in their natural habitats.

Pampas cats have never been studied in the wild and there is no clear picture of their numbers. International trade in their pelts ceased in 1987, but they are still hunted in some parts of South America.

Why do cats climb trees? Well, they do so for several reasons. It’s easier to see what’s going on in the neighborhood sitting high in a tree. Cats will climb trees to escape from predators like the neighbor’s dog. Being predators themselves, they also have a better view of any prey nearby. Sometimes that prey […]

A cat’s whiskers are not just pretty adornments. The serve useful functions that cats cannot do without. Cats have whiskers on several areas of their bodies. They are located on the sides of the nose, approximately 12 on each side in 4 horizontal rows. There are shorter whiskers above the eyebrows, on the chin and […]

First signs of pregnancy in a cat occur about 3 weeks after mating.Gestation in cats is 9 weeks, about 65 days. The number of kittens will determine how much the abdomen will become distended. During the last 3 weeks the kittens will put on much weight. If you’re unsure about the pregnancy it’s advisable for […]