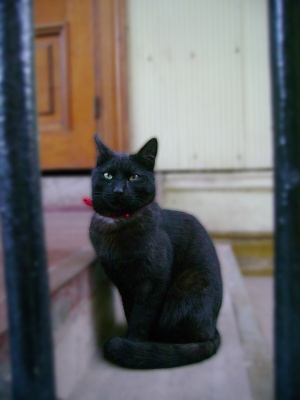 Did you know that shelters report that black cats and dogs are most often overlooked because of their color? They are the last pets people choose to adopt because they are black. I couldn’t believe it, but sadly it’s true.

There are cultures, including our own, that believe black cats (and dogs too) are unlucky and evil. Old superstitions still persist.

Many shelters will not allow black cats to be adopted around Halloween time, from the end of September until the start of November. This is because some people use black cats for rituals performed at that time. Some people choose to display them and when Halloween is over, discard them like so much trash. And if you can believe this one, there are people who believe in vampires and that they transform themselves into black dogs.

Years ago my daughter brought home a stray black kitten. I never once thought about color and Shasha, as we named him, had the sweetest personality. He was very smart too and my daughter taught him several tricks. Sasha loved food and would do anything for a treat.

Shelters have also reported that when placing black dogs together with dogs having light coat olors, people ignore the black ones.

Personally, I’ve always been attracted to the dark color coats. All of my dogs were dark-coated or black with the exception of my first dog, a tan German Shepherd mix. She was the last one left of the litter, so no choice was involved.

I realize we’re all attracted to certain colors. But the next time you want to adopt a cat or a dog, don’t judge them on the color of their fur. Please don’t overlook the black ones. Take the time to learn the pet’s character and heart, after all, isn’t that what’s most important. Color doesn’t matter to our pets. You could be missing out on a pet that can turn out to be very special and give you years of joy and love.

Cat shows, while not as well-known as dog shows, are still pretty popular. The first modern cat show took place in London in 1871. The Cat Fanciers’ Association (CFA) has been running cat shows in the U.S. since 1906. Cat shows work in a similar fashion to dog shows. Each breed of cats has its […]