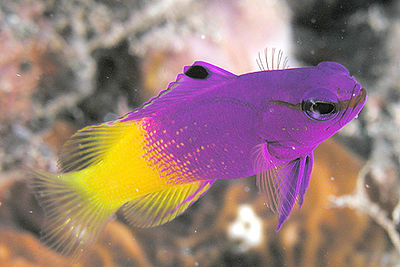 The Royal Gramma is a beautiful and mostly peaceful fish and therefore extremely popular in reef aquariums. It’s a hardy fish and ideal for beginners. It is found in the Western Caribbean and Central and South America.

Males and females are both 3.2 in. Large Damselfish may attack the Gramma. This fish should not be kept with its own kind unless in a formed male-female pair. Tank size is a minimum of 13 gal. Royal Gramma will stake out a home base in a cave and spend much of their time in it.

Males are 4 in., females 3.1 in. This fish is shy and will hide if there are any other busy or aggressive fish in the tank. It can be difficult to get eating at first and will occasionally refuse to eat until it dies. However, once successfully acclimated it is a hardy fish. It is […]