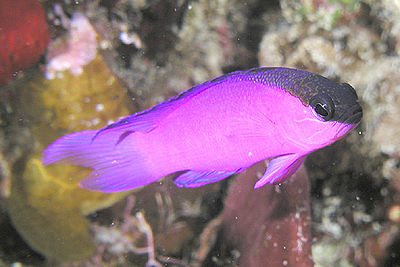 The Blackcap Gramma is also known as the Blackcap Basslet. It is found in the Western Caribbean and Central America.

Males and females are both 4 in. This is a very shy fish and any aggressive species will dominate it. It is best kept singly or in a pair. Larger groups are possible if the aquarium is large. The minimum size tank is 13 gal. The aquarium should include rocks, crevices and caves. Since this fish inhabits deep waters in the wild, lighting should be kept to a minimum. Feed it all types of meaty foods. It will also eat small invertebrate in the tank, such as copepods, amphipods and isopods.

The Eightline Wrasse is sometimes mistakenly called the Twelve Line Wrasse. It is ideal for a fish-only tank. It is exceptionally hardy, easy to feed and readily available, but can be very aggressive to other fish. Other Wrasses and Dottybacks can be aggressive towards it. Adult Eightline Wrasse reach 5.5 in. The minimum tank size […]

The Iridis Wrasse is also known as the Radiant Wrass, Orangehead Wrasse and the Radiant Africa Wrasse. It is found in the Western Indian Ocean. Males and females are both 4.7 in. This wrasse has a peaceful nature and should only be housed with peaceful fish. Minimum tank size is 40 gal. The aquarium should […]