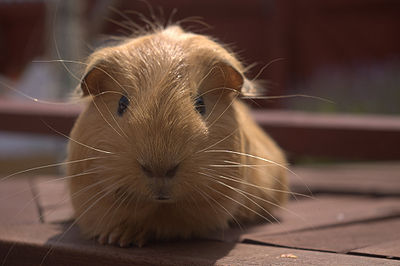 There are many misconceptions about guinea pigs which may prevent people from adopting them.

Fact: Male guinea pigs can get along just fine as long as there isn’t a female in the cage as well.

Fact: Guinea pigs are often kept in cages which are too small, causing them to be inactive. A pair of guinea pigs should have a cage at least 10.5 square feet (30″ x 50″).

Myth: Rabbits and guinea pigs can live together in one cage.

Fact: Rabbits may injure the guinea pig and hog its food, so this is not a good idea.

Fact: A veterinarian specializing in small animals can do both procedures. Spaying a female is a more invasive procedure and should only be done if necessary. A neutered male and a female who has not been spayed can live together harmoniously.

Fact: There is no problem at all with pregnant women coming into contact with guinea pigs.

Fact: The average life span of a guinea pig is between four and eight years.

Fact: The level of interaction between guinea pigs and humans is dependent on how much attention the humans give to the animals.

Myth: Pairs must be from the same litter.

Fact: Although adopting siblings raises the chances that the guinea pigs will get along with each other, this is more a matter of personality than family ties.

Myth: Any two guinea pigs can be thrown into a cage together.

Fact: Introducing a new guinea pig to the cage should be done gradually so that the pigs can get to know each other.

Fact: Guinea pigs prefer to live in pairs and enjoy cuddling with each other. A guinea pig who loses a cage mate will grieve.

What cages, accessories and food are good for gerbils and hamsters?