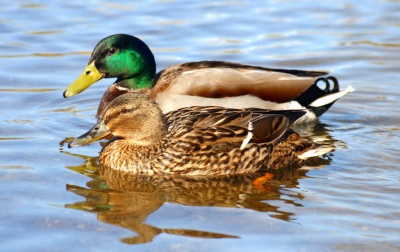 Who doesn’t have fond childhood memories of feeding ducks in the park or the local pond? Unfortunately this practice is unhealthy for the ducks as well as for people. Feeding wild ducks leads to:

What should you do instead?

If you enjoy interacting with ducks and feel that you must feed them, give them nutritious food instead. You can purchase commercial duck feed, or give them grapes cut in half, cracked corn, barley, oats, birdseed or other grains. They will also thrive on cheerios, a thawed bag of frozen peas or corn, or kale, romaine or other leafy greens (not iceberg lettuce).

If you are feeding ducks as a way to avoid waste, a better solution would be to add your bread to a compost pile, or use stale bread in recipes such as croutons, bread pudding and stuffing.

Besides abstaining from feeding the ducks yourself, you can also inform others of the dangers of feeding them. Talk to city officials about posting signs near ponds and lakes which explain why the ducks shouldn’t be fed. Teach your children that respecting animals sometimes means not feeding them.

Thanks to the efforts of the Humane Society of the United States, private citizens are banned from having wild animals as pets. Current owners must microchip their animals and register them. Exotic animal owners who have had their local, state or federal licenses revoked are prohibited from holding such animals. Up till now Ohio was […]

Largest Hen’s Egg in the World

February 25 has been designated as the day to celebrate the hen that laid the largest egg. As of August 5, 2008, the world’s record for the largest egg laid by a hen took place in Cuba. The one year old Cuban hen named Titi belonged to the Martinez-Guerra family of Campo Florido, Cuba which […]