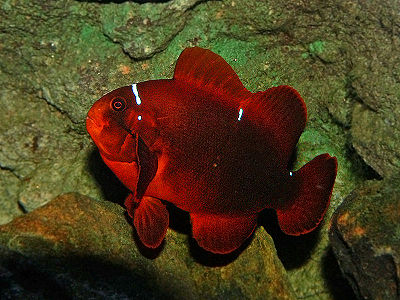 The Maroon Anemonefish (also known as the Maroon Clownfish, is a damselfish, native to the tropical Indo-Pacific. They are very popular in saltwater aquariums.

The males grow to 3-4 in., the females up to 6.7 in. They must be kept separate from other anemonefish as they can be territorial and aggressive with their own kind. They should also not be kept with any fish small enough to become their prey. They need a tank size of a minimum of 24 gal. with places to hide. In the ocean they feed on zooplankton, but are not very picky when it comes to food. They are ominvores and should be fed a diet of meaty foods and herbivore food. Never catch your Maroon Clownfish in a net when you need to move it, since you might entangle and injure its cheekspines. Instead, use a specimen container.

Males are 11 in., females smaller. The majestic can take care of itself and will hide to avoid confrontations with territorial fish. Tank size is a minimum of 106 gal. Found in Indonesia, Papua New Guinea, the Philippines, the Great Barrier Reef and Micronesia. List of Fish Andaman Damselfish Arabian (Orange) Dottyback Asful (Arabian) Angelfish […]