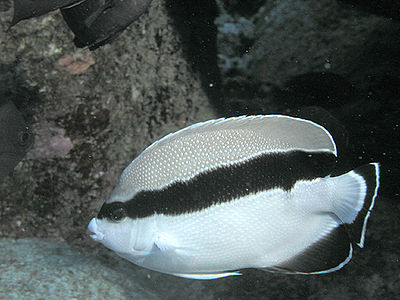 The Bandit Angelfish is a rare and distinctive fish, found in the Hawaiian and Johnston Islands.

One of the smallest of this species, they grow to 7 in. Wrasses, some surgeons and tangs may show aggression while other species are usually peaceful. The minimum size tank is 90 gals. This fish is shy and requires many hiding places. The aquarium should contain plenty of live rock growth for grazing on. The Bandit Angelfish should be fed foods which contain sponge as a main ingredient.

This fish inhabits deep waters and when it is caught it will sometimes develop decompression disease. To ensure you are purchasing a healthy fish, check that it is flying level (not struggling at a vertical position) and that its abdomen is not puffed out.

The Bandit Angelfish has rough scales which can get caught in a net, so it is best to move it using a container.

Males are about 9.5 in. up to 14 in.; females are smaller. Other fish often ignore the rock beauty. Tank size is a minimum of 120 gal. Found in the tropical Western Atlantic, this fish is difficult to keep in captivity. Only very experienced aquarists should attempt it. The Rock Beauty must have sponges in […]