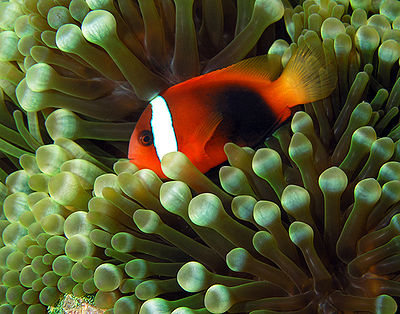 The Tomato Anemonefish is also known as the tomato clownfish due to its bright orange-red color. It is native to the tropical Western Pacific.

The females are about 5 1/2 in., while the males are smaller. Clownfish and Damsels may be aggressive. It is recommended to keep this fish alone or in mated couples since it can be aggressive, even to other clownfish. The tank should be a minimum of 80 gal. and it is recommended to place this fish in a quarantine tank at first to rid it of saltwater-borne diseases. The Tomato Amnemonefish likes places to hide in, including live rock growth.

This fish should be fed a varied and nutritious diet that includes meaty food types as well as some algae or algae based food. Flake food designed for omnivore fish can be a good base. The Tomato Anemonefish should be fed 2-3 times a day.

Males and females are both 4.7 in. Fairy Wrasses and territorially aggressive species such as Surgeons may cause conflict. Minimum tank size is 66 gal. for one, 120 gal. for a pair. This fish does best when housed in a pair or a group. Found in the Western Central Pacific, this fish is difficult to […]

Clarke’s Anemonefish are also called Yellowtail clownfish and are extremely popular aquarium fish. These fish have vivid black, white and yellow stripes, though the exact pattern shows considerable geographical variation. They are natively found in Indo-Pacific waters. Because they are bred in captivity, they are easy to find and reasonably priced. They are a perfect […]