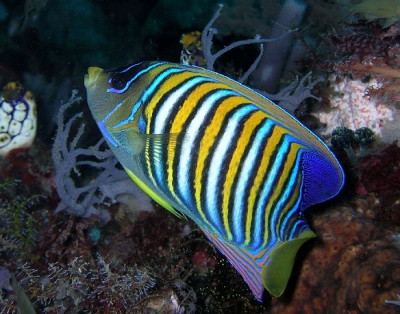 The Regal Angelfish is a sensitive fish and should only be kept by an experienced fish keeper. It is found in the Red Sea and tropical Indo-Pacific.

Males and females are both 10 in. Larger tangs and other angelfish can be aggressive. This fish should be kept singly in a peaceful tank. Minimum tank size is 120 gal. Stable water quality and strong water circulation are important. The aquarium should include live rock and lots of hiding spots. It likes to nip soft corals, stony corals with large polyps, and clam mantels. Feed meaty foods, in small quantities a few times a day.