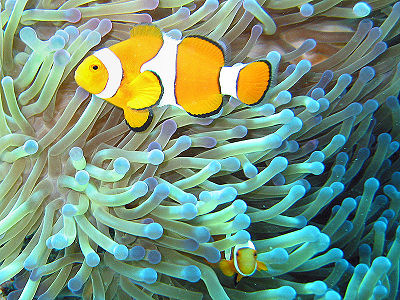 This fish can be called Ocellaris Clownfish, Common or False Percula Clownfish. Males grow to about 2.75 in., females to 4.3 in. Damsels may be territorial. Minimum size tank 25 gal. They are found in the Eastern Indian Ocean and the Tropical Pacific and is similar to the Percula Clownfish.

This fish is both easy to find and easy to care for. It eats all kinds of live, frozen, and flake foods. It is best to feed it small amounts several times a day. They can be territorial, especially as they get older.

Clownfish were made famous by the movie Finding Nemo, whose creator was inspired by a picture of two clownfish peeking out of an anemone. Andrew Stanton knew he wanted to make a movie whose main characters were fish, so he looked through books until he found the clownfish. He told National Geographic, “It was so arresting. I had no idea what kind of fish they were, but I couldn’t take my eyes off them. And as an entertainer, the fact that they were called clownfish—it was perfect. There’s almost nothing more appealing than these little fish that want to play peekaboo with you.”

In Finding Nemo, the main character, Nemo, is flushed down the toilet and returns to the wild. Many people believe this is an acceptable way to dispose of fish, but in reality fish flushed down the toilet are immediately killed. After the film was released, clownfish became an extremely popular pet, but unfortunately many of these new fish owners did not research the requirements for raising these fish. Because clownfish are salt water fish, they need different equipment from fresh water fish.

Sadly, clownfish have not been found to be any funnier than other fish.

Males are 11 in., females smaller. The majestic can take care of itself and will hide to avoid confrontations with territorial fish. Tank size is a minimum of 106 gal. Found in Indonesia, Papua New Guinea, the Philippines, the Great Barrier Reef and Micronesia. List of Fish Andaman Damselfish Arabian (Orange) Dottyback Asful (Arabian) Angelfish […]

The Orange Skunk Anemonefish is also called the skunk-striped anemonefish, since it is bright orange with a white stripe. It lives in the Western Pacific. It is a hardy fish and appropriate for a beginner/ The females grow up to 4.3 in., the males are .75-2.5 in. They can be bothered by members of the […]