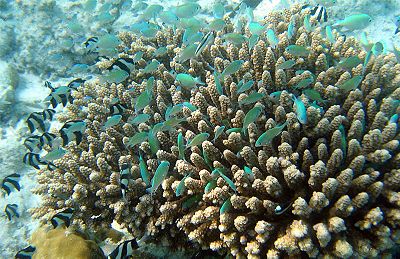 The Blue-green Chromis is a hardy inexpensive fish appropriate for a beginner. It is best kept in groups of 3 or more. It’s found throughout the tropical Indo-Pacific.

Males are 3.1 in., the females smaller. These fish should be kept separate from predatory fish. The minimum tank size 13 gal. Although they are small, they are very active and need plenty of swimming room. Blue-green Chromis will eat most meaty foods and dry flakes.

The Iridis Wrasse is also known as the Radiant Wrass, Orangehead Wrasse and the Radiant Africa Wrasse. It is found in the Western Indian Ocean. Males and females are both 4.7 in. This wrasse has a peaceful nature and should only be housed with peaceful fish. Minimum tank size is 40 gal. The aquarium should […]

Scribbled Angelfish are common in large public aquariums and less commonly kept as pets. However, they can be very friendly and will even eat from a human’s hand once they have become comfortable in their new home. Males are 11 in., females slightly smaller. They are native to Northern Australia and Indonesia. Because they are […]

The Spotband Butterflyfish is one of the most hardy fish and almost no technical care is needed to maintain it. It is found from the Eastern Indian Ocean to Micronesia. Both males and females measure 4.7 in. While Surgeons and Tangs may react aggressively, this is a peaceful natured fish and should be added before […]