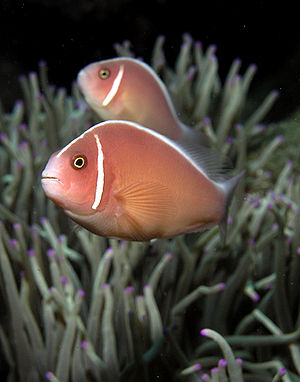 The Pink Skunk Anemonefish, or Pink Skunk Clownfish, is a fairly easy fish to keep. Being a hardy fish, it is ideal for beginners. It is bred in captivity and therefore readily available and inexpensive. It is native to the Eastern Indian Ocean to the Western Pacific Ocean.

The males are 2.75 in., while the females grow up to 4 in. Damsels and Wrasses can be aggressive toward them, and they can be quite territorial. The minimum size tank 13 gal. Feed these fish all kinds of live, frozen, and flake foods several times a day.

The Orange Skunk Anemonefish is also called the skunk-striped anemonefish, since it is bright orange with a white stripe. It lives in the Western Pacific. It is a hardy fish and appropriate for a beginner/ The females grow up to 4.3 in., the males are .75-2.5 in. They can be bothered by members of the […]

The Queen Angelfish is a moderately difficult fish to keep and not recommended for beginners. It is native to the Western Atlantic and the Caribbean. This fish spends most of its time out in the open and is awake during the day and rests at night. Males and females are both 18 in. Other angelfish […]