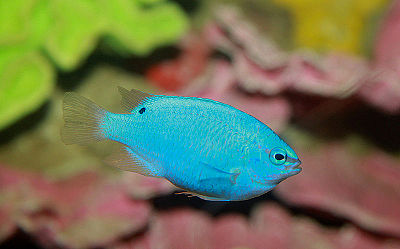 Males 3.5 in., females 2.5 in. Sometimes threatened by other damselfish & wrasses. Minimum tank size 13 gal. Found from Eastern Indian Ocean throughout the tropical Pacific. Damsels are quite aggressive, even to somewhat larger fish. They can be bred in captivity, and reports of success are not uncommon. Damsels may also be seen as a food source for larger fish, like Lionfish and Groupers, so it is not recommended to keep these together. Some owners even use the Damsels to cycle their tanks. The Blue Damsels are great starter pets, and are commonly found in novice aquariums.