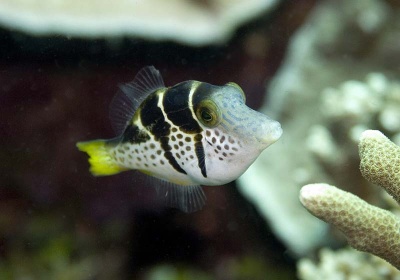 The Valentini Pufferfish is also called the Black Saddle Pufferfish, Blacksaddled Toby, Valentini Toby, or Saddled Toby. It is
found in the tropical Indo-Pacific from the Red Sea to Eastern Australian coast.

Males are 4.3 in., females about 3 in. Small fish such as Damsels, Tangs and some Wrasses may be troublesome. Tank size is a minimum of 40 gal. When threatened, this fish will inflate its body to almost twice its normal size. To avoid alarming it, transfer it using a container. Feed a varied diet of meaty foods including; squid, krill, clams, and hard shelled shrimp. The hard shelled shrimp helps wear down the fish’s ever-growing teeth. It should be fed two to three times a day.

This fish, found in the Persian Gulf, Oman, Pakistan and Sri Lanka, is also called the Neon Dottyback. It has a bright orange body with electric blue bars. The males are 4 in. and the females are 3.2 in. Similar species and wrasses may not tolerate this Dottyback. In a small aquarium, this fish will […]

The Semicircle Angelfish is also known as the Blue Angelfish and Koran Angelfish. It is found in the Red Sea, East Africa and the tropical Indo-Pacific. Adults and juveniles have very different appearances. Angelfish in general are not very hardy, but this fish is one of the hardiest of this fish family. Males are 15.7 […]

The Banggai Cardinalfish (also called the Kaudern’s Cardinal Fish) is close to being an endangered species due to over-collection. You should only buy captive-bred specimens. These fish are only found natively in a rather small area around Banggai Island off Sulawesi. However, specimens lost from fishing boats now range further than the original Banggai Islands […]