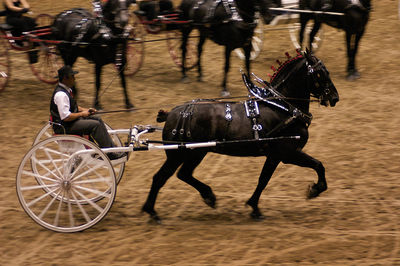 The practice of horse soring is when the hooves and lower leg areas are intentionally injured in order to cause the horse pain and distress. This cruel treatment is in order to make the horse step higher than natural in shows. This exaggerated gait gives owners and trainers more of an advantage in winning.

The Horse Protection Act of 1970 was designed to end the inhumane treatment called horse soring.

In early March 2012, the HSUS-led undercover team investigated the industry that resulted in federal criminal indictments being handed down. Jackie McConnell, a horse trainer who won many awards, will be prosecuted.

Wayne Pacelle, President and CEO of the HSUS says, “There are a lot of good people in the industry and we want to work with them, with the USDA and with the Congress to stamp out the rampant abuses that have gone on far too long.”

Friends of Animals (FOA) is reminding pet parents to spay or neuter their dogs and cats during this coming spring season. When your pet has an unplanned pregnancy, it results in abandonment of the offspring or sending them to shelters, and in either case, the end is the same – a cruel death. FOA is […]

Gestation crates are 2 x 7 feet enclosures which are barely larger than the sows they hold. The animal can’t turn around, lie down comfortably or move in any direction for her entire life. After 2 or 3 years of living through several pregnancies in these crates and when the sow’s body can’t produce any […]