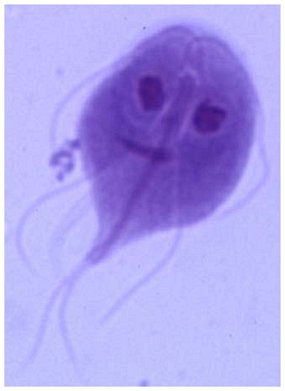 Giardia is a parasite, a protozoa (one-celled organism) that lives in the small intestine of cats and dogs (it affects humans too). Giardia are present throughout the U.S. and other parts of the world.

Infestation usually occurs when water containing fecal matter of fish and other animals is ingested. Contaminated food can also be a culprit.

Giardia infects the lining of the digestive tract and can invade the liver. Symptoms are inappentance, diarrhea, nausea, stomach pain, gas, bloating, weight loss. It is more prevalent in cats and puppies. If your cat or puppy has frequent diarrhea, giardia may be the cause.

A vaccine is now available against Giardia. Treatment with metronidazole (Flagyl) and Fenbendazole have side effects and are not totally effective. Treatment usually has to be repeated. There is a natural remedy that has proven effective call Oil of Oregano and it’s available in gel caps.

An acral (affecting a limb) lick granuloma is an open sore. Constant licking or grooming one area of the skin prevents healing. While it can affect any breed of dog, large breeds such as German Shepherds, Great Danes, Labrador Retrievers, Golden Retrievers and Dobermans seem more prone to lick granulomas. Once thought to be psychogenic […]