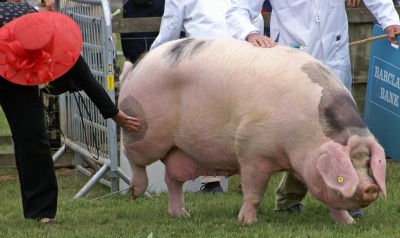 Modern food production has changed agriculture drastically. It used to be that many different breeds were used on farms to produce meat, milk and eggs. Today, the breeds that produce maximum output are used to the exclusion of all others. In the United States, one breed of dairy cattle (the Holstein) produces almost all the milk; a single breed of chicken (the White Leghorn) lays nearly all of the eggs; and one turkey variety (the Broad Breasted White) is used for almost all the turkey meat. 75% of purebred pigs born every year are from three breeds and 60% of all purebred sheep come from four breeds.

Because only these breeds are being actively bred on a large scale, other breeds are declining. About 100 breeds are endangered, and some are even close to extinction. Genetic diversity is important for the health and strength of the species. Without it, the species loses some of its potential for adapting to changing environmental conditions and for usefulness to humans.

Some critically endangered species are:

The Buckeye is a dual-purpose breed of chicken with a red plumage. It was developed by an American woman in the late nineteenth century. These chickens are very active and even like to chase mice! They are extremely friendly toward people.

The Chantecler is the first Canadian breed. It has a small comb and almost no wattles, which allows it to withstand cold Canadian winters without frostbite. It is a calm and gentle bird.

The Black Spanish chicken is an aristocratic bird with greenish black plumage. It has white earlobes and a white face. Breeders attempted to enlarge the white on the chickens’ faces and this resulted in loss of hardiness. As are result, they lost popularity in favor of hardier breeds. They are known for laying large amounts of white eggs.

The Leicester Longwool (or English Leicester) was bred in England in the mid 1700s in order to produce high quality fleece. It was popular in the United States as a cross-breeder. It fell out of favor to the Merino and other wool breeds. In the 19030s or 40s it became extinct in America and was brought back in the 1990s by importing sheep from Australia. Conservation flocks have been established, but it is still critically endangered.

The Santa Cruz breed was developed on an isolated island off the coast of California called Santa Cruz Island. Sheep were raised on this island and some escaped and formed a feral population. Because of its isolation, this group of sheep eventually developed into a new breed. In 1978, the island became a nature conservatory and the sheep were bred by Californian breeders in order to conserve them. These sheep have genetic characteristics not found in other sheep due to their long period of isolation, so scientists are studying them in conjunction with the conservation efforts.

The Dutch Belted is a dairy cow bred in the Netherlands. It is black with a white belt around its middle. This breed lost popularity in Europe during and after World War II. In 1950, there were only four or five herds of this breed in Holland. Conservation efforts have raised the numbers but there are still fewer than 1000 individuals worldwide.

In the early 1500s, Spanish cattle were brought to the New World. The Florida Cracker is one of the breeds which developed from the Spanish breeds. Due to the harsh conditions of the Deep South, these cattle are heat-tolerant, long-lived, resistant to parasites and disease, and productive despite the low quality of the forage in the region. When cattle were imported from India and new breeds were developed which thrived in the Southern climate, the Florida Cracker was abandoned. The state of Florida is active in conservation of the breed, and provides for the cattle in state parks and forests. Although the breed is still critically endangered, there is hope for its resurgence.

The Arapawa goat is thought to be the only remnant of a breed called the Old English Goat. According to historical records, Captain James Cook released Old English Goats in New Zealand in 1777. These goats eventually developed into a distinct breed. Meanwhile, the Old English Goat became extinct as people stopped keeping yard goats, and more productive goats took over. In the 1970s, government authorities in New Zealand worried that the goats were damaging native forests and tried to eradicate them. In response, private citizens set up a refuge for them. Today there are about 300 goats in captivity, as well as 150-200 in the wild. These goats are medium-sized, with long hair and numerous color combinations. They generally give birth to twins without difficulty and are quite maternal.

The San Clemente goat developed from a feral population which was imported to the San Clemente Island. The island, off the coast of California, is owned by the U.S. Navy. The Navy concluded that these goats were a nuisance to plant and animal life on the island and planned to kill them all. This plan was foiled by the court, and instead the goats were taken off-island to be adopted but not bred. These goats are small and thin, exhibiting gentleness and maternal instincts.

The Gloucestershire Old Spots originated in England in the 1800s. It has a white coat with black spots. Its popularity in the pas was due to its being very thrifty. It forages for food outdoors and eats fallen apples and agricultural by-products such as whey from cheese. After World War I it gained in popularity since its lean meat was in high demand, but once meat production moved to factories, pigs that thrived outdoors were no longer valued. Gloucestershire Old Spots were imported to the U.S. in the 1900s and today there are about 200 breeding animals in the United States and fewer than 1000 in the UK. Support for the breed comes from organizations in the U.S. and the British Royal Family, which prefers pork from these pigs to any other.

A popular breed on homesteads in the Southeast, the Guinea Hog has now been reduced to about 200 individuals. This pig forages outdoors and is useful in keeping away snakes and grazing, rooting, tilling compost and garden soil. These pigs are not used for meat, since they are too small and produce meat that is too fatty for today’s market. Since their primary use is on small farms, and these are uncommon these days, the breed is now critically endangered. They did have a brief resurgence in the 1980s though, when herds were raised for the pet market.

In the 1930s, the U.S. Department of Agriculture research center at Beltsville, Maryland, developed the Beltsville Small White turkey to fill a consumer need. Surveys showed that consumers wanted a small meaty bird which would fit their small families and refrigerators. By the 1970s the breed was replaced by other breeds which could be slaughtered young or grow to a bigger size, and became almost extinct. Today the breed exists in research labs and is bred by a few exhibition breeders.

Another endangered turkey breed is the Midget White. It was developed as a small version of the broad breasted turkey, but never became popular. The original flock which was developed at the University of Massachusetts, was dispersed numerous times, and the future of the breed lies in the hands of private individuals.

Amphibians are facing extinction around the world. The main cause is a deadly parasitic fungus known as amphibian chytrid, but amphibians are also suffering from habitat loss, climate change, pollution, pesticides and introduced species. The Panamanian golden frog is in danger because of chytrid fungus. This disease affects the amphibian’s skin, through which it breathes […]