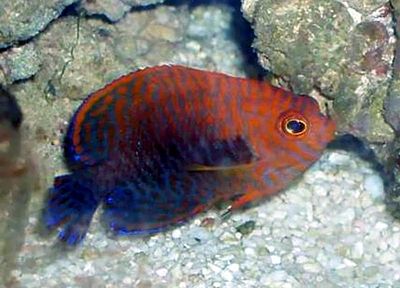 Dwarf Angelfish are native to the coral reefs of the world, where they feed on algae and small plants and animals. Most Dwarf Angelfish live in pairs, although some species are solitary. These fish are classified as hermaphroditic because they are born as females and the dominant fish change sex to become males. Males are typically bigger, but it is hard to tell the difference between the sexes.

To keep Dwarf Angelfish at home, provide an environment similar to their native habitat by providing rocks and caves inside the aquarium. Water temperature should be between 74° F and 80° F, salinity range from 1.020 to 1.026 and dKH or carbonate hardness levels in the 8 – 12 range. Dwarf Angelfish should be quarantined before they are placed in a tank with other fish, to make sure they aren’t carrying parasites.

Dwarf Angelfish can be aggressive toward each other so it is best to keep only one in each tank. They can be territorial, so it is best to introduce them to the tank once the other fish are already established.

The Eightline Wrasse is sometimes mistakenly called the Twelve Line Wrasse. It is ideal for a fish-only tank. It is exceptionally hardy, easy to feed and readily available, but can be very aggressive to other fish. Other Wrasses and Dottybacks can be aggressive towards it. Adult Eightline Wrasse reach 5.5 in. The minimum tank size […]

The Maldive Velvet Fairy Wrasse is also called the Red velvet Wrasse. It is found in the Maldives and islands of the Chagos Archipelago. The front part of its body is red, while the rest is yellow. The colors on the female are more subdued, and the male is brighter. Its color may vary depending […]