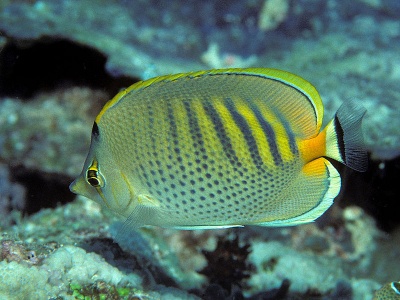 The Spotband Butterflyfish is one of the most hardy fish and almost no technical care is needed to maintain it. It is found from the Eastern Indian Ocean to Micronesia.

Both males and females measure 4.7 in. While Surgeons and Tangs may react aggressively, this is a peaceful natured fish and should be added before aggressive species. Minimum tank size is 66 gal. If possible, provide filamentous algae in the tank. Although this fish spends most of its time in the open water, the tank should still include hiding spaces.

The Spotband Butterflyfish is an omnivore and will eat a variety of foods. Since its mouth is very small, the food should be very fine.

The Goldflake Angelfish, also known as the Gold-spangled or Gold-spotted Angelfish, is an extremely beautiful fish. It has a colorful spot around its mouth and gold spots all over its body. Males are 10 in., females slightly smaller. It is found in the tropical Pacific Ocean. This fish is capable of taking care of itself; […]