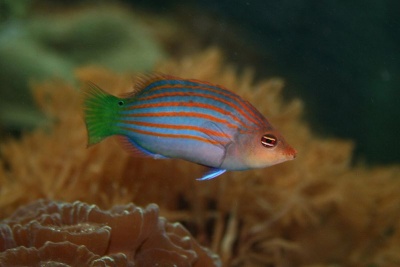 The Pajama Wrasse is a hardy fish, disease resistant and likely to be long-lived. It controls pests in the aquarium, and will even clean the bodies and fins of other fish. This fish is found throughout the Red Sea and tropical Indo-Pacific.

Males grow up to 4 in., females up to 2 in. Most other species do not bother this fish except perhaps dottybacks which may be territorial. It doesn’t do well with other lined wrasses. Tank size is a minimum of 13 gal.

The Sixline Wrasse is a quick swimmer and though shy in the wild, can be quite boisterous in a tank. Due to its activeness, it should be fed at least twice a day. It is carnivorous and should be provided with a diet rich in all kinds of protein foods, formulas and flakes with an emphasis on small crustaceans.