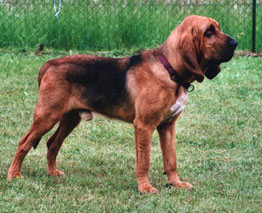 Hounding is a so-called “sport” using dogs with high-tech radio collars including GPS to chase and run down animals. With a portable receiver, the “hunter” just waits for the signal that the dogs have trapped the animal. The hunter follows the signal reaching the trapped animal and shoots it at point-blank range.

Both the dogs and the animals they track and trap are in a state of stress as well as danger. The large animals, bears and bobcats, in their terror strike out and may injure or kill a dog.

Hounding may separate a mother bear from her cubs leaving them to be torn apart by the dogs.

Most of the dogs used for the hunt spend their lives confined to kennels or chained when not tracking. They are not pets and often wind up in shelters when they outlive their usefulness, usually in poor health and/or with injuries.

The American Kennel Club (AKC) who sets breeds standards is supporting those in California seeking to defend this inhumane and unsporting practice. In a letter to California legislators, the AKC claims that hounding “enhances the bond between humans and canines.” They dare to claim this even with the poor treatment of the dogs.

Please contact your representatives at http://www.leginfo.ca.gov/yourleg.html and urge them to pass SB1221 and stop this horrendous practice.

A Pet’s Point of View

Our pets have emotions almost the same as ours. The following expresses their feelings. A Pet’s Point of View My life is likely to last 10-15 years. Any separation from you will be painful for me. Remember that before you get me. Don’t be angry with e for long and don’t lock me up as […]