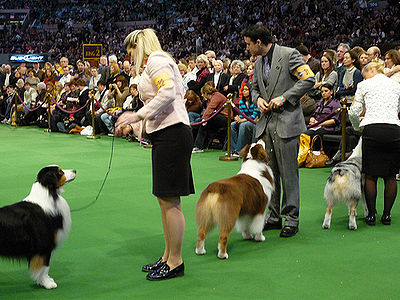 When dogs were first domesticated in prehistoric times, humans encouraged the survival of certain types of dogs by feeding and caring for the ones that were useful to them, and killing or neglecting the others. As a result, certain dog types emerged. People encouraged these distinctions by mating dogs of a certain type with each other. Breeding became popular in the Medieval period.

Is breeding an ethical enterprise in today’s world? These days, most dogs are not bred as working dogs, but rather for competitions or for the joy of owning a purebred. Some animal welfare activists object to the breeding of animals for profit. They worry that the breeders are more concerned with making money than with the well-being of the dogs. These “puppy mills” mass produce puppies for sale and do not concern themselves with the animal’s health or make sure to place each dog in a responsible home.

Another concern regarding breeding is that even the most responsible breeder perpetuates certain health problems through inbreeding. Additionally, some of the breed standards are unhealthy, but have not been changed to reflect current scientific knowledge. Diseases such as Brachycephalic Syndrome are passed down through generations of certain breeds, as a result of attempts to conform to breed standards. ‎Some registries require that a purebred be tested for the absence of conditions known to plague that particular breed before it can be listed in the registry.

Breeding places emphasis on external appearance and not on traits that are really important. The dogs are judged less for their functionality and more for their beauty. Since dogs are valued primarily as companions these days, more emphasis could be placed on temperament and good health. Dogs could be bred to eliminate diseases, instead of in order to achieve a specific appearance.

If you choose to adopt a purebred, your first stop should be the local animal shelters. Many purebreds are abandoned by their families and end up in shelters. If you didn’t find the dog you were looking for there, adopting from a responsible breeder is an option.

According to the Humane Society of the United States, a responsible breeder doesn’t always have puppies available, but will instead keep a waiting list of customers who want a dog when there is a new litter. He will only breed one or two breeds and be actively involved in the clubs that specialize in these breeds. A responsible breeder will ask the prospective customer questions about how the dog will be cared for and will provide guidance on care and training. He will provide documentation showing that the puppy’s parents and grandparents were free of genetic diseases.

When choosing a breeder to buy from it is a good idea to get a referral from a vet or a breeding club. Make sure you visit the place where the dogs are being raised, and can ascertain that the conditions are adequate.

L’Oreal is the largest beauty and cosmetics company in the world. The HSUS tells us that for years L’Oreal has been involved in developing safe testing of their products without using animals. L’Oreal has provided the Environmental Protection Agency (EPA) with funds to test their methods and assess the safety in cosmetics. In a March […]