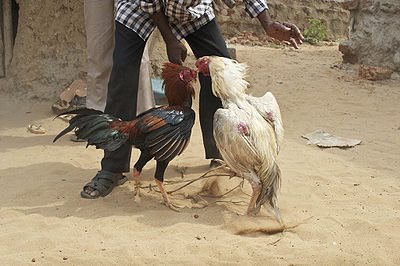 Cockfighting began in Southeast Asia more than 3,000 years ago. And it continues there today as well as in many other parts of the world. Although it is illegal in all 50 U.S. States, stories abound of authorities breaking up cockfighting rings. Cockfighting is also illegal in Australia, Brazil and some parts of Europe.

In nature, roosters may fight over territory or a female, but fights are usually brief and don’t involve serious injury.

In cockfighting, special roosters are bred for aggression, sometimes even drugged to make them more aggressive. They spend several months training for a fight, running obstacle courses and having practice fights with other roosters. Breeders keep detailed records – family and medical histories, fight history, characteristics. The birds’ feathers are plucked except for tail, head and wing feathers. The combs (wattles) below the beak are cut to prevent having something to hold onto. Harsh chemicals are used to toughen the skin.

The ASPCA and the HSUS tell us that in the ring, 2 or more roosters are forced to fight. The birds wear long, sharp dagger-like blades on their legs, called spurs or gaffs, which can puncture lungs, pierce eyes or break bones. The fight lasts until a bird dies, anywhere from a couple of minutes to more than 30 minutes. Injuries are usually so severe that both birds die.

People attend these horrific fights for the purpose of gambling. Thousands of dollars can be involved. Some attendees make the fight a family outing, exposing their children and desensitizing them to such cruelty. Besides gambling, drug dealers are involved. Illegal weapons are present due to large cash amounts. To avoid discovery, organizers move locations frequently.

Thanks to the efforts of the HSUS, the ASPCA and other humane organizations, while cockfighting is illegal in the U.S., they continue to work for stronger legislation.

In Texas recently, the cockfighting law was strengthened, adding that possessing a rooster with intent to fight is now illegal. Cockfighting is a state jail felony as are attending such fights, possessing cockfighting weapons or allowing one’s property to be used for cockfighting.

You can help strengthen the laws of your State by writing to your representatives to end all parts of this horrible practice. Contact the HSUS or ASPCA online for further information.

Elephants – Did You Know

Elephants are one of the most favorite animals to children (and many adults as well) They are the largest living land animal in the world. Here are some other interesting facts about them. Elephants are the only other animals besides humans who mourn for their dead. They will visit the bones of friends who have […]

Keep Your Gerbil Safe out of the Cage

Gerbils love to run and are very fast runners. Letting your gerbil out of the cage as often as is convenient for you satisfies this instinct. It’s very important to create a safe area where your gerbil can’t fall or escape. Choose a room that can be closed off from the rest of your home. […]