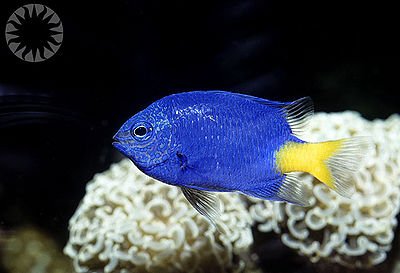 The Yellow-tailed Blue Damselfish is a hardy fish found in the Tropical Pacific. The males are 2.75 in., while the females are slightly smaller. As a result of their hardiness, some people unfortunately use them to cycle a new tank, but this is cruel to the fish. A more humane way to cycle your saltwater tank is with live rock.

These fish will eat most fish food including vitamin enriched flake food, frozen, freeze dried and live foods. They should be fed three times a day. Most fish ignore it in a tank, but it may be aggressive toward its own species. The minimum size tank is 13 gal. Since this fish is easy to care for, it is recommended for beginners.

Fish Fish 6 inches and under Tang