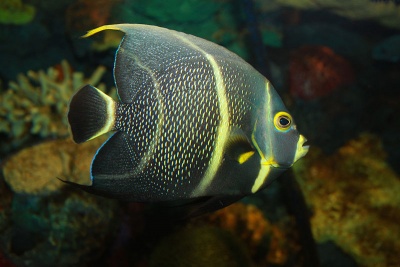 The French Angelfish is both a popular aquarium fish and a popular food in places such as Singapore and Thailand.It is found in the western Atlantic from Florida to Brazil and in the Caribbean. It is a pretty hardy fish.

Males are 16 in., and females are smaller. Youngsters clean other fish and are usually not singled out for aggression. This fish is best kept in a pair. Minimum size tank is 160 gal. Provide plenty of live rock and hiding spots. Do not keep this fish in a reef aquarium since it will nip at soft corals, stony corals and clam mantles. The French Angelfish is an omnivore and will usually accept live, fresh, frozen and formula food. It should be fed several times a day.

Males and females are both 2 in. This reclusive fish may find Damselfish and Dottybacks react adversely. Minimum size tank is 12 gal. Found in Indonesia. This fish can be kept on its own, in a pair or in a group. It can be shy and will spend a lot of time hiding. List of […]

The Pajama Wrasse is a hardy fish, disease resistant and likely to be long-lived. It controls pests in the aquarium, and will even clean the bodies and fins of other fish. This fish is found throughout the Red Sea and tropical Indo-Pacific. Males grow up to 4 in., females up to 2 in. Most other […]