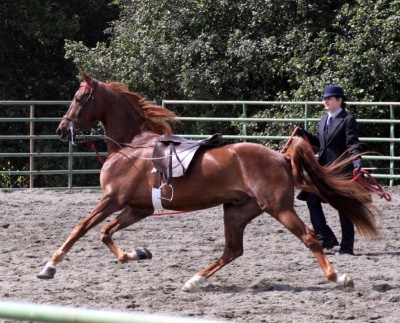 The American Saddlebred is a popular parade mount and often used for trail riding. It has a comfortable gait and a steady temperament. In horse shows, it is most commonly seen in Saddle seat style riding, and in various types of driving.

Where did the Saddlebred get its start?

In the 1830s, the Kentucky Saddler was crossed with Morgans and Thoroughbreds to create the Saddlebred. It was a popular plantation horse and after the Civil War it was promoted as a show horse. The horse has been nicknamed, “The Peacock of the Horse World.”

Saddlebreds have large, wide-set eyes and ears set close together. They are usually black, bay, chestnut, or brown, but come in other colors too. The average height of a saddlebred is 15-16 hh. The most distinguishing feature of Saddlebreds is their high-stepping gaits.

The Belgian Horse was originally known as the “Flanders Horse” after the region of origin. The Belgian stands 16.2-17 hands high. Common colors are sorrel and roan. The Belgian has a very good temperament and trains easily. This large horse is sometimes called a “gentle giant.” It has the ability to pull tremendous weights and […]

The Spanish Horse is intelligent and even-tempered, eager to please. They take part in dressage, jumping and driving competitions. Known for its bravery, in Spain, this horse is ridden in the bullfighting arena. The Spanish Horse has been used to improve many other breeds including American breeds. Where does the Purebred Spanish Horse come from? […]