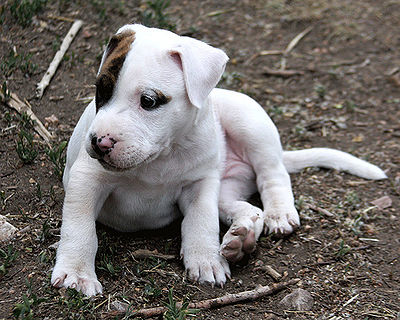 Native Americans welcomed wolves into their homes and domesticated them. According to a Native American legend, the dog freely chose to become a companion to man. Dogs were considered part of the family and given names which reflected their personalities and characteristics. Before the introduction of horses to North America (by the Europeans), dogs were used for transportation and to pull and carry heavy loads. Whether the true Native American dog (also called the Plains Indian dog or Navajo dog) still exists is in dispute. Many claim it has become extinct due to interbreeding with wolves and European breeds. When the Native Americans were forced into reservations, the population and popularity of this dog suffered.

In the mid-1800s commercialization meant that pet products such as pet food, medicine and toys became widely available. At this point, people began to see pets as part of the ideal family. In the 1840s, interest in purebred animals grew. The first animal protection group in the United States was the American Society for the Prevention of Cruelty to Animals (ASPCA), founded by Henry Bergh in April 1866.

The 1920s saw the introduction of reptiles as pets, which was made possible by the introduction of central heating in homes. This was also the era when dogs were romanticized as the heroes in movies. After World War II, American prosperity led to an increase in pet ownership in the U.S. Rescue dogs became especially well-known after their work in the ruins of the World Trade Center in Sep. 2001.

How can I help my senior dog?

We can all agree that our pets are too soon taken from us whether by old age, illness or accident. If we are fortunate, we see them attain their normal life span. However the aging process begins earlier than we would like. We see the signs gradually – their movements are slower, their eyesight dims […]