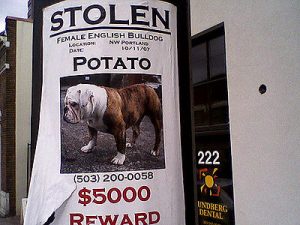 We lost our Westie Tigger to bladder cancer at age 8 1/2, October 11, 2007. Since we lost Tigs, I’ve had little “happenings”, but nothing big. Seeing a flash of white dog out of the corner of my eye (when Pooh’s nowhere close to me), feeling a “bed bounce” like when Tigs used to jump […]