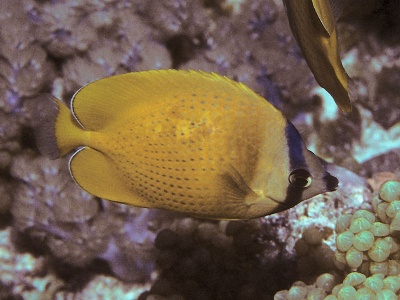 The Sunburst Butterflyfish, found in the tropical Indo-Pacific from the Red Sea to Hawaii, is also called the Black-lipped Butterflyfish and Klein’s Butterflyfish. This fish is yellowish brown with 1-2 broad lighter vertical bars. It has a black bar across the eyes. It is an easy fish to keep and suitable for beginners.

Males and females are both 6 in. As newcomers, they can be bullied by tangs, surgeons or other butterflyfish, but usually endure with no damage. When keeping them in groups, it is best to introduce them to the aquarium simultaneously. The minimum tank size is 53 gal. They should be fed meaty foods three times a day. They should also be fed algae-based foods.

This fish, found in the Persian Gulf, Oman, Pakistan and Sri Lanka, is also called the Neon Dottyback. It has a bright orange body with electric blue bars. The males are 4 in. and the females are 3.2 in. Similar species and wrasses may not tolerate this Dottyback. In a small aquarium, this fish will […]