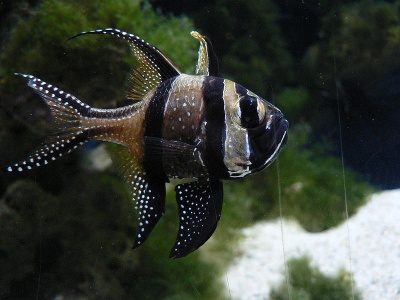 The Banggai Cardinalfish (also called the Kaudern’s Cardinal Fish) is close to being an endangered species due to over-collection. You should only buy captive-bred specimens. These fish are only found natively in a rather small area around Banggai Island off Sulawesi. However, specimens lost from fishing boats now range further than the original Banggai Islands in Indonesia.

Males and females are both 3 in. Keep separate from busy or aggressively territorial fish. The minimum size tank is 15 gal. These fish like a lot of hiding spaces and live rock. It may take them a day or two to acclimate to a new tank.