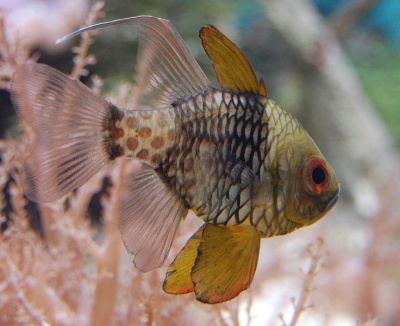 The Pajama Cardinalfish is also called the Polka-dot Cardinalfish or Spotted Cardinalfish. It is found in the Western Pacific, Indonesia and the Great Barrier Reef. This is a good beginner fish for someone just starting out with saltwater fish. It is inexpensive, easy to transport and adjusts easily to a new aquarium.

Males reach up to 4 in. while the females are slightly smaller. Damsels, Dwarf Angelfish or aggressive fish can prove problematic with this shy, unassertive fish. Tank size is a minimum of 45 gal. It is a slow and methodical swimmer and likes to hide in sea grass or other plants. Feed a well-balanced diet of meaty foods.

The Spotband Butterflyfish is one of the most hardy fish and almost no technical care is needed to maintain it. It is found from the Eastern Indian Ocean to Micronesia. Both males and females measure 4.7 in. While Surgeons and Tangs may react aggressively, this is a peaceful natured fish and should be added before […]