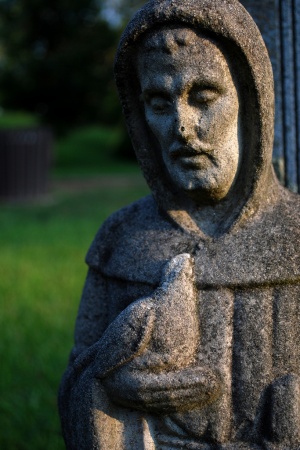 St. Francis of Assisi was a Catholic preacher who lived from 1181 or 1182 until 1126. He formed the order called the Franciscans. He is considered the patron saint of animals and the environment, and the Catholic and Anglican churches hold ceremonies blessing the animals on his feast day, October 4. This date was chosen as World Animal Day in his honor.

Many of the stories told about the life of St. Francis involve his love of animals. In one story, he preached to the birds and in another he commanded a wolf to stop threatening the townspeople. St. Francis was known for freeing animals. In one case he released a rabbit from a trap, and in another he returned a fish to the water. Legend has it that at his deathbed he thanked his donkey for his services to him.

St. Francis preached that both man and animal were required to praise God and that man is the steward of all creatures and as such required to protect the animals. Toward the end of his life he wrote the “Canticle of Brother Sun,” which outlined his love for creation.

“His attitude towards creation was simple and direct, as simple as the gaze of a dove; as he considered the universe, in his pure, spiritual vision, he referred every created thing to the Creator of all. He saw God in everything, and loved and praised him in all creation. By God’s generosity and goodness, he possessed God in everything and everything in God. The realization that everything comes from the same source made him call all created things — no matter how insignificant — his brothers and sisters, because they had the same origins as he.”

In Judaism, the Torah forbids eating certain foods during Passover. Any foods containing chametz are not to be eaten or owned by a Jew. Chametz is any product made from one of 5 types of grain – wheat, barley, spelt, rye and oats. In order to be considered chametz, the product must be combined with […]