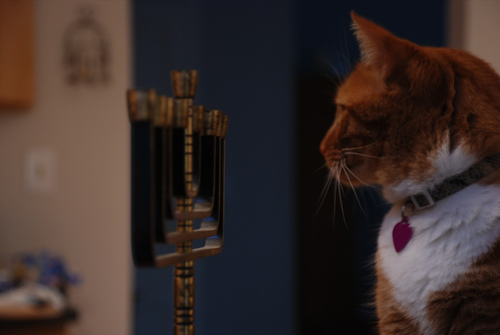 According to Judaism, God is blessed for creating and preserving animals, ecosystems, and human beings.

“Make a joyful noise to the Lord, all the earth.…On the glorious splendor of your majesty, and on your wondrous works, I will meditate…All your works shall give thanks to you, O Lord, and all your faithful shall bless you….Happy are those whose help is the God of Jacob, whose hope is in the Lord their G-d, who made heaven and earth, the sea, and all that is in them; who keeps faith forever; who executes justice for the oppressed; who gives food to the hungry…He gives to the animals their food, and to the young ravens when they cry… Praise the Lord from the earth, you sea monsters and all deeps, fire and hail, snow and frost, stormy wind fulfilling his command! Mountains and all hills, fruit trees and all cedars! Wild animals and all cattle, creeping things and flying birds!…Let them praise the name of the Lord, for his name alone is exalted; his glory is above earth and heaven…Let everything that breathes praise the Lord! Praise the Lord!”

“You make springs gush forth in the valleys; they flow between the hills, giving drink to every wild animal; the wild asses quench their thirst. By the streams the birds of the air have their habitation; they sing among the branches. From your lofty abode you water the mountains; the earth is satisfied with the fruit of your work. You cause the grass to grow for the cattle, and plants for people to use, to bring forth food from the earth, and wine to gladden the human heart, oil to make the face shine, and bread to strengthen the human heart. The trees of the Lord are watered abundantly, the cedars of Lebanon that he planted. In them the birds build their nests; the stork has its home in the fir trees. The high mountains are for the wild goats; the rocks are a refuge for the coneys. You have made the moon to mark the seasons; the sun knows its time for setting. You make darkness, and it is night, when all animals of the forest come creeping out. The young lions roar for their prey, seeking their food from G-d. When the sun rises, they withdraw and lie down in their dens…O Lord, how manifold are your works! In wisdom you have made them all; the earth is full of your creatures.”

“Blessed art Thou, O Lord our G-d, King of the Universe, who created beautiful animals in His world”

–from The Talmud, Berachot 9.

“It is forbidden, according to the law of the Torah, to inflict pain upon any living creature. On the contrary, it is our duty to relieve the pain of any creature, even if it is ownerless or belongs to a non-Jew.”

“Since…the desire of procuring good food necessitates the slaying of animals, the Law enjoins that the death of the animal should be the easiest. It is not allowed to torment the animal by cutting the throat in a clumsy manner, by poleaxing, or by cutting off a limb whilst the animal is alive.”

–from Maimonides, The Guide for the Perplexed, 637.

Jewish philosophy also dealt with the relationship between human and animals.

“I consider therefore the following opinion as most correct according to the teaching of the Bible, and best in accordance with the results of philosophy; namely, that the Universe does not exist for man’s sake, but that each being exists for its own sake, and not because of some other thing…each part is declared to be the product of God’s will, and to satisfy by its existence the intention [of the Creator]. This is expressed by the phrase, ‘And God saw that it was good’ (Gen i.4, etc.).”

“When a man becomes accustomed to have pity even upon animals who were created to serve us…his soul will likewise grow accustomed to be kind to human beings.”

“It is a great principle that there are holy sparks in all there is in the world. Nothing is void of sparks, even trees and stones.”

Sources taken from The Humane Society of the United States: Orthodox Judaism

What foods are unsafe for pets to eat?

We love our pets and want to share our lives with them, but sharing certain foods can be deadly. Here is a list of some of the foods NOT to feed your pets. They are not listed in any order of importance. If you know of any other foods that can be dangerous for our […]