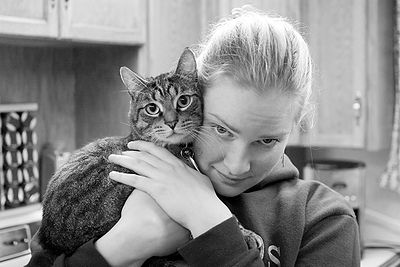 From studies conducted and my own observations, the results are some pets enjoy being the only one and some enjoy the company of others.

Usually, if socialized early with other animals, your pet will enjoy companionship. It can be difficult to train prey animals and predators to live together peacefully. But it can be done.

To demonstrate different personalities, I have stories of 2 pets.

We had a dog and several cats as pets at one time. My daughter wanted a particular breed of cat, a Himalayan and we found a beauty which we named Susie Wong. One of my cats, Peaches, a calico, was a loner and ignored the other cats. However, Sasha and Coco befriended Susie. Things went along fine until about a year later, Susie began urinating all over the house. We took her to the vet who could find nothing physically wrong with her. We contacted Susie’s breeder and discussed the problem with her. She suggested that perhaps Susie was unhappy sharing her home with other cats. While it was an unhappy decision for us, our breeder found a new home for Susie and as an only pet, she blossomed.

About 9 months ago, I lost my beloved rottie, Timo, to cancer. She and my German Shepherd, Quanah, were the best of friends. Quanah missed Timo so much that she became very depressed which was reflected in her behavior. Quanah loved being outdoors in my fenced-in garden, barking at passersby, but she began to remain in the house and would not let me out of her sight. Most days she would eat little. She loved our vet, but the first time he came to the house after helping Timo to the Rainbow Bridge, Quanah tried to hide from him. My 15 year old little terrier, Toto, never played with the other dogs and Quanah never bonded with her. At this point I became very concerned. I decided to look for another companion for Quanah, so my daughter and I visited a shelter and found a friend. We brought Murphy home that day and much to my relief, she and Quanah bonded right away. Quanah began playing again and eating normally. Obviously, while Quanah and Murphy both enjoy being the center of attention, they are very sociable and enjoy the company of each other as well as their humans.

Horses are herd animals and very social. They need the companionship of other horses as well as their humans. Racehorses that are high-strung often have other animals as companions – dogs, goats, another horse – to calm them down.

Male birds will often fight with each other. Frank Sinatra’s wife had a pet parrot. The parrot resented Frank and would often nip him as he saw Frank as a rival for his mistress’s affections.

With many pets of all kinds, those of the same sex, particularly males in their rivalry for the attention of females, do not get along and will cause physical harm to one another. It’s important to do your research before bringing a pet home, to know all about its personality and behavior.

Why Dogs Lift Their Legs to Urinate

Renowned veterinarian Dr. Mart Becker likened a dog’s leg lifting to the Rockettes of New York City Radio City Music Hall fame. But they (the dogs) wouldn’t make a very attractive chorus line. Most male dogs do lift their leg to urinate, but some females do too. Intact female dogs will sometimes lift their leg […]

According to the Baltimore Sun newspaper, Veterinarians and Web MD are teaming up to bring the same resources to pet owners that people have through Web MD. A team of vets from the American Veterinary Medical Association are going to answer consumers’ questions via Web MD’s online forum called Pet Health Exchange. Facebook Comments Box

What animals are capable of Having a pet means learning the meaning of unconditional love. In return for food and the comfort of a home, most pets will protect their loved ones even at the cost of their own lives. But some pets are invaluable in helping people. Dogs can be trained to assist people […]