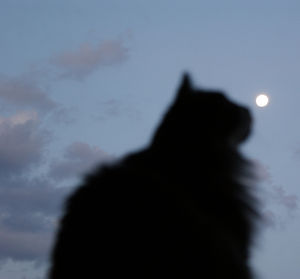 We attribute all kinds of odd behavior to the full moon. The word “lunacy” comes from lunar, having to do with the moon. As children, we were told the moon was made out of cheese and that if we looked hard enough, we could see a man in the moon. Of course, now that men have actually been on the moon, we could say that one was at least predicted.

But do we know if pets are affected by full moons when strange behavior is supposed to occur? Two different studies, one in Australia and one in Britain have opposing views. The Australian study chalks it up to old wives tales, but the British study believes there is some truth to it.

Some veterinarians seem to agree with the British study. It has been noted that emergencies during a full moon are 23% higher in cats and 28% higher in dogs. This may be because we take our pets outdoors more because it’s so light.

Pets and humans as well, may be more restless during a full moon. This can be attributed to the fact that before electricity, more light from the full moon kept people awake.

And as for dogs and wolves howling during a full moon, well that’s been debunked. Wolves howl (dogs as well) to communicate with each other, full moon or not.

What will people believe in next? Feel free to add more.

Zoonoses are diseases which can be transmitted from animals to humans or from humans to animals (sometimes called reverse zoonoses). Most pets can transmit certain diseases to human beings. Some animal diseases which affect humans are Rabies, Ringworm, Tuberculosis and Cat Scratching Disease, Psittacosis, Leptospirosis. Salmonella is also frequently carried from animal to human. Humans […]

Do You Really Want a Pet?

Congratulations on your interest in sharing your life with another living thing. There are a few things that you should think about before you take those final steps. Remember, when you choose to own a pet, you are taking on a major responsibility. A pet is a living being with feelings. You are making a […]