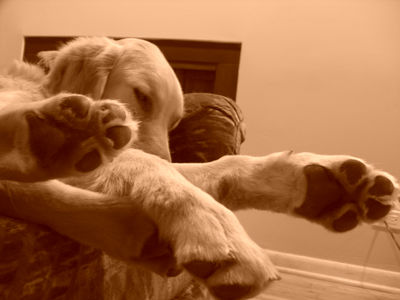 The dewclaw is an extra digit on on animal’s foot. Dewclaws can be found on some mammals, birds and reptiles. Although they don’t appear to serve any purpose now, the dewclaw is thought to have been another toe at some time.

Dogs are the most well-known animal with dewclaws. They are on the inside of the front legs, although occasionally they can be found on the hind legs as well. They are positioned high enough that when the dog is standing, they don’t touch the ground.

It is believed by some that when a dog is running and the dewclaw touches the ground, it increases traction. Dogs also appear to use their dewclaws when gripping bones.

If puppies are born with hind leg dewclaws, to prevent getting them snagged on something, removal is recommended. It can be done during a spay or neuter surgery while the dog is anesthetized.

Sometimes dewclaws can be a problem. If they catch on something or break, they can cause infection and pain. They are usually not attached to the leg very strongly. But surgical removal of the dewclaws can cause pain as well and the area is easily accessible to licking.

Hunting dogs often have their dewclaws removed to prevent getting them caught on vegetation when running through such areas. Removal of dewclaws is against the law in some countries except for hunting dogs.

In the final analysis, why put a pet through a surgical procedure such as dewclaw removal and cause much unnecessary pain unless there is a medical reason? Keep the dewclaws trimmed and watch for any problems.

What Your Dog’s Tongue Tells About Health

The tongue is not a large organ, but of course a very important one. It is made of muscle, connective and fatty tissue, blood vessels and nerves. There are small, mushroom-shaped protrusions called papillae that cover the top of the tongue and aid in tasting. A dog’s tongue has many uses besides tasting food and […]

The Bearded Dragon requires a body temperature of 93 – 110 degrees Fahrenheit to maintain good health. When it reaches this temperature, the dragon often opens its mouth. This activity is called basking and allows the Bearded Dragon to dissipate extra heat and enjoy basking. While open mouth breathing can be a sign of respiratory […]