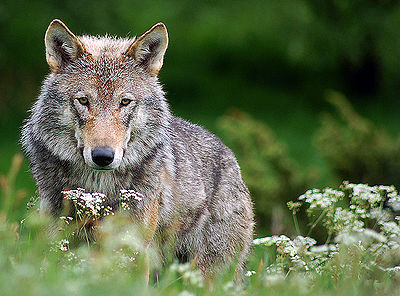 New DNA evidence seems to point to the fact that both dogs and wolves have evolved from large wolf-like canines that have been extinct for thousands of years. This could mean that while they are related, the dog’s ancestor is not the wolf.

Dogs have been domesticated for thousands of years. They’ve been bred by humans to suit their jobs, whether it be herding, hunting, guarding, simply pets and more. That’s why each breed is known for its individual characteristics and personalities.

Just as we humans have changed over thousands of years, adapting to our world, so have dogs and other animals.

Behavioral studies have also shown marked differences in some behaviors between dogs and wolves. Does this mean that proponents of raw feeding for dogs could be mistaken? You be the judge and make the choices you and your dog are comfortable with.

For more information, read the study from PLoS Genetics and co-author, Robert Wayne or go to news.discovery.com.

Why Are Tropical Birds So Colorful?

Tropical birds are so popular as pets because of their beautiful colorful plumage. Why do they have such colorful feathers? There are actually a few reasons. Colors help male birds attract females As they are unable to buy chocolate or jewelry, male birds attract the females with colors. Which in many ways turns the question […]

Observing my dogs when they are in deep sleep mode, I would have to say yes, some animals do dream. In experiments conducted on rats in 2000, researchers at the Massachusetts Institute of Technology have shown that animals really do dream. The results are that their dreams can be complex and may be replays of […]

Why Do Animals Have Tails?

Animals have tails for several reasons, including balance, communication, navigation, and defense. Some animals like monkeys have tails that help them grab onto tree limbs for climbing and sometimes to grab food. Farm animals such as cows, sheep, horses and goats swish their tails to keep flies away. Horses that have their tails cut lose […]