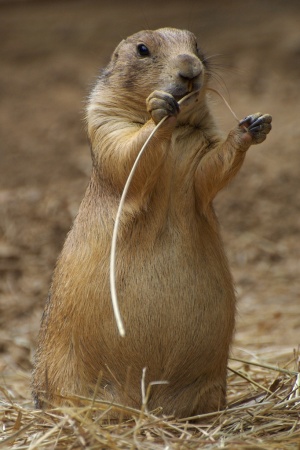 Prairie dogs are burrowing rodents native to the grasslands of North America. There are 5 species of prairie dog and the most commonly kept as a pet is the black tailed prairie dog. Prairie dogs require a lot of attention and have a long lifespan (8-12 years), so they are a significant commitment.

Additionally, there are some legal and ethical issues involved in the keeping of prairie dogs as pets:

Because they are captured in the wild, it is only possible to adopt a prairie dog in the spring. Purchase from a dealer who is USDA licensed and uses humane ways to capture the animals. It is also crucial that the dealer allow the animals to adjust to captivity before selling them as pets. Ask the dealer to show you a health certificate as well as the USDA paperwork.

Prairie dogs can be kept in same-sex pairs or groups, or one male with females. If there is more than one male they will fight over the females. Males may emit a muskier odor than females. Make sure to spay or neuter your pet immediately after adoption.

Prairie dogs are very social and need a lot of interaction so that they don’t become depressed and ill. They enjoy the company of other prairie dogs, but if they bond with each other first, it will be difficult for them to bond with humans. It is best to keep them separately until they have bonded with the people in their lives and only then house them together.

When frightened, prairie dogs can become aggressive and inflict painful bites. For this reason, they may not be the best pets for children. It is important to learn to understand their body language and respond to their feelings.

Prairie dogs are fairly large and quite active so they need a big cage. Provide lots of toys, especially chewable ones. An exercise wheel is a good addition to the cage.

Prairie dogs eat a variety of grass hays, along with some rabbit pellets and small amounts of other greens, vegetables, and grains.

Exotic pets are considered any pets besides cats, dogs and horses. When you are called out of town on business or you are planning a vacation, your exotic pet needs to be in the care of someone, not always easy to find. Many people can count on friends, neighbors or relatives to pet sit while […]

Where does the Chinchilla come from? This small rodent is native to South America. They live on rocky,  arid areas in the mountains. Chinchillas are named for the Chincha Indians living in the Andes. What does the Chinchilla look llike? The body is about 12 inches long and the squirrel-like tail about 5-6 inches. The […]