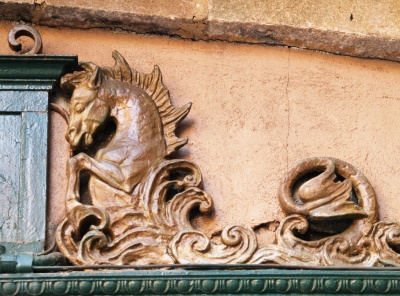 Poseidon is known as the Greek god of the sea. He is said to have created horses along with sea creatures and earthquakes (possibly due to tsunamis in Greece).

When Poseidon was content, seas were calm. But when Poseidon was angered or ignored, he was said to strike the ground with his 3 pronged Trident, causing earthquakes, shipwrecks and drownings. Horses were sometimes sacrificed to the sea when sailors prayed to Poseidon for a safe voyage.

Legend tells that Poseidon was in competition with the goddess Athena for the love of the people. They were told that the one creating the most useful object would have a city named for them. While Poseidon created the horse, Athena created the olive, the choice of the people, which is why the capital of Greece is called Athens.

Compared with Neptune, the Roman god of the sea, Poseidon is said to have created zebras as well.

Most Popular Cat Names in 2010

Veterinary Pet Insurance came up with the following names of cats as being most popular in 2010. Max Chloe Oliver Lucky Charlie VPI’s list of unusual cats’ names are really interesting: Purr Diem, Bing Clawsby, Chairman Meow, Optimus Pants and Admiral Pancake. Guess the old-fashioned names like Puss and Kitty are far down on the […]